There was pomp and colour as the book title – Knowledge for Wealth Creation: A Kenyan Perspective was launched at the University of Nairobi. The book, a product of the University’s Elimika project, has eight authors and is edited by Prof. Judith Bahemuka, Joshua Kivuva and Dr. George Michuki.

Presiding over the launch, former Chief Justice and President of the Supreme Court of Kenya, Dr. Willy Mutunga, spoke about alternative leadership. 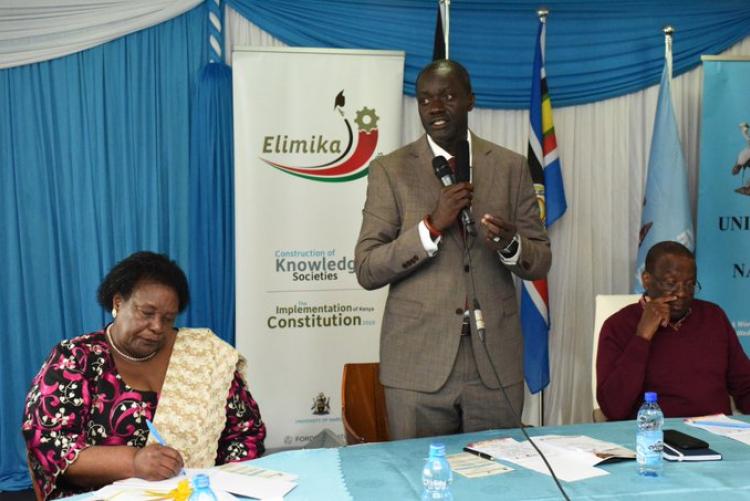 “Breathing life into the Constitution has been a struggle. The big five communities should allow for rotational leadership in the country. There is a great opportunity in Kenya for completely subverting the politics of division,” he said. “The Elimika Book brings together scholars from different fields with different perspectives on different matters which when put together builds on our understanding of the knowledge of the constitution and governance. Elimika project is grounded on the works of many great philosophers. Public and organic intellectuals get involved. Educators are also educated. Self-education is an important element in this project. This publication is also about hope, I like the idea of multidisciplinary approach that was used to write the book. African countries need to tap into new knowledge, technologies and innovations to enable them turn their economies into streams of wealth.”

Makueni County Governor, Prof. Kivutha Kibwana, touched on the role of engaging the community is such initiatives.

“I do understand the value of community research and Makueni has indeed facilitated the Elimika research. The business of universities is to generate and disseminated knowledge. Ultimately it is knowledge from the communities that makes it superior knowledge as it applies to theories,” he said. “Academia must be intricately involved in every area of our society because academia provides thought leadership; partnership with the private sector and government is critical. South Korea is a classic example of how collaboration between the academia and industry can be used to address societal problems. And that local leaders should stop viewing professionals as a threat, but as partners in development.”

“If knowledge is not disseminated it remains within the walls of universities and in the end helps no one,” he said. “I strongly believe that it is important to embrace a more multifaceted approach in generating, sharing and utilizing knowledge for wealth creation and for the greater good of all nations. Integrity, hard work and humility is essential for wealth creation. Kenya will only be known for the wealth it creates for its people rather than individuals."

Maurice Makoloo, Regional Director, Ford Foundation, echoed the words of the Kenyan national anthem ‘Plenty be found within our borders’ and asked that there may be plenty of trust, plenty of knowledge, plenty of equity, plenty of patience as this is needed in the process of devolution. Makoloo also highlighted the role of universities and initiatives such as Elimika.

“The privilege of scholars in a university comes with a responsibility. The responsibility is to create knowledge - new knowledge disrupts. There is need for cross and inter-generational conversations about the history of our nation and to pass down this knowledge.  Our young ones are so detached from the history of this nation,” he observed. “The belief that Universities are citadels of knowledge is being challenged. As universities impart knowledge and skills, they will be seized of the many other citadels and cells of knowledge that exist outside “the ivory tower.”

Speaking on behalf of the Vice-Chancellor, University of Nairobi, Deputy Vice-Chancellor, Human Resource and Administration, Prof. Stephen Kiama, said that Elimika has played a big role in impacting communities. 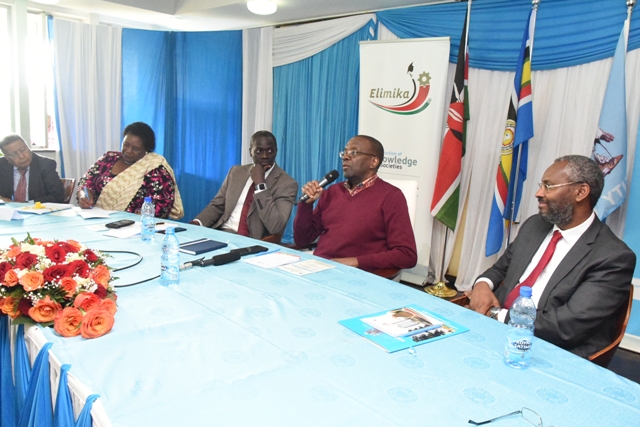 “Through Elimika, the University has taken the lead in expanding knowledge boundaries to the broader arena of knowledge. Elimika has brought to the fore new knowledge which is critical in advancing Kenya’s development agenda, in particular, the Big 4 Agenda, all of which are covered in the new book,” he said. “The chapters in this book interrogate issues of human rights, citizen participation, good governance and sustainable livelihoods with the overarching theme of knowledge societies. This book is a tool to transform our society to a cohesive society.”

END_OF_DOCUMENT_TOKEN_TO_BE_REPLACED 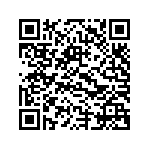