It has emerged that inequalities in the society is the number one reason for violence that has permeated every election cycle in Kenya and virtually every election on the African continent. This was revealed as UNDP launched a report titled “Human Development Report 2019 – Beyond Income, Beyond Averages, Beyond Today: Inequalities in Human Development in the 21st Century.” 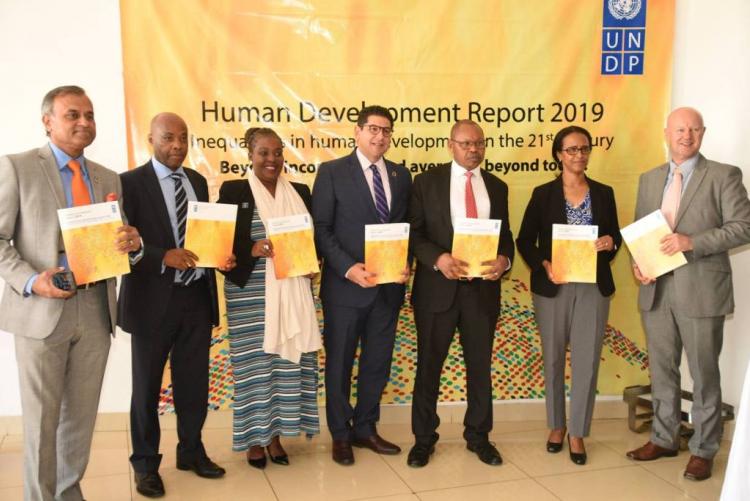 Speaking during the launch of the report on December 17, 2019 at the University of Nairobi Towers, Mr. Torome Saitoti, Principal Secretary, The National Treasury and Planning, State Department of Planning, observed that the Ministry, they have put in place policy options to help in driving out inequalities. “Inequality is a product of unfair system,” he said. He mentioned the various efforts being carried out by government to address inequality challenges. Such include the Big Four Agenda which addresses universal healthcare, affordable housing, food security and manufacturing.  He called upon all stakeholders to join hands in reducing inequalities and its impact on society.

University of Nairobi Vice Chancellor, Prof. Isaac Mbeche, praised the partnership between the University and UNDP noting that through research, they can address the inequality challenges that face the country.  “The University of Nairobi and UNDP have partnered in many projects. We are happy to lead research on country projects, impacts of devolution on healthcare, agriculture,” he said. The Vice Chancellor, urged Kenyans to use Afro barometer data that has been the brain-child of Institute of Development Studies.  He opined that the data is the most comprehensive in Africa as it capture perceptions on various governance issues, climate change, health, agriculture among others. It covers 35 countries.

Walid Badawi, Resident Representative, UNDP, Kenya noted that as the UNDP, they are keen on addressing human development issues as they help in improving peoples’ lives.  He observed that human development connects with Kenya’s Vision 2030 and African Union Agenda 2063 and it leads to shared prosperity. He revealed that the Handshake and Building Bridges Initiative, BBI, are some of the efforts to address inequalities. The vast disparity in power, education, medical care, incomes are some of the reasons Kenyans engage in strife. He revealed that the inequalities will increase the gap between the haves and have nots. “Inequalities begin at birth. We need universal provision of education, retirement, nutrition; water and sanitation, industrial labour, social security and healthcare among others,” to address the inequalities, he said.

The priority areas that the government was urged to address include:  inclusive growth, governance peace and security and climate change.  It was also noted that technology can aggravate inequality.

Prof. Karuti Kanyinga, Director, Institute of Development Studies, opined that inequalities generate conflicts and strife due to inadequate resource distribution.   He cautioned against unsustainable growth in Africa which is largely driven by service industry and not manufacturing.  On his part, Prof. Michael Chege, warned that poverty level in Africa is rising because of inequality. “We have more poor people in the continent. Most people will be living in extreme poverty in the coming years. 60% of those numbers will be located in Africa,” he said.  He urged the government to allocate more resources to support the Big Four Agenda, otherwise it will collapse and hence the danger of increasing inequalities.