“US policy in Sub -Saharan Africa has not changed but there are challenges like corruption and bad governance that need to be addressed by African states. Key areas of cooperation remain governance, health, trade and security.” 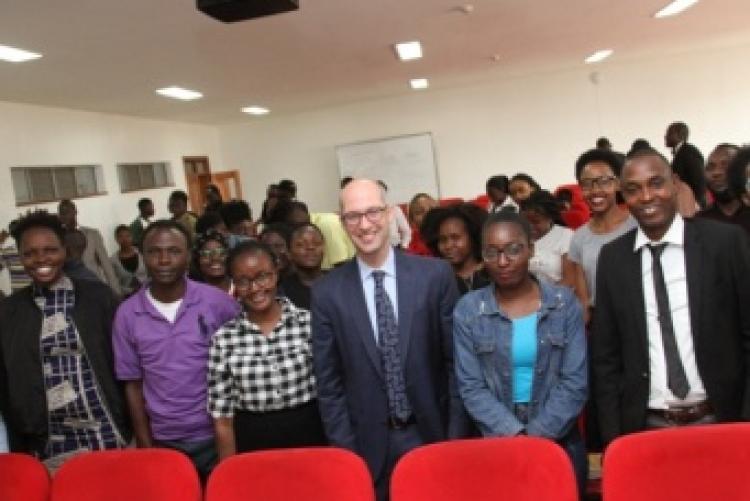 This is one of the highlights that Policy Expert Judd Devermont underscored during his public lecture at the University of Nairobi on Friday November 1, 2019.

The director of the Africa Program at the Center for Strategic and International Studies (CSIS) emphasized that the US should increase its investments in Africa without worrying about Chinese and Russian exploits. “The US should provide financially sound alternatives to state-led initiatives from countries like China and Russia.” He remarked. “The US should help African countries to sustainably develop as opposed to being trapped in opaque debts.”

He noted that Unlike Chinese, the US policy does not entertain government to government projects. However, the government may encourage American companies/ business enterprises to invest in Africa.  Trade between US and Africa is still insignificant accounting for a meager 2%. There are a lot of opportunities for growth that could be exploited.

He agreed with his audience that the US politics is currently polarised but the policy making and objectives for Africa are still consistent. The trade wars between China and US are going to create negative impact on Africa.

Evidently there is an increasing scramble for Africa.  As Wade Shopard states in his article in the Forbes, “Africa has become the fastest urbanizing region of the world, with rural migrants moving into cities a clip that has even surpassed that of China and India, as the continent becomes one of the final frontiers of the forth industrial revolution.”  This rapid transformation has presented big opportunities for countries willing to invest in Africa and no country has seized the opportunity like China. According to the China Investment Global Tracker Chinese investments in the sub-Saharan Africa total $299 billion from 2005 to 2018. And 39 of 54 African nations have now signed on to Beijing’s Belt and Road Initiative – a trillion-dollar plan to link infrastructure and trade via a vast new network of roads, rail lines, ports, and pipelines across Eurasia, the Middle East, and Africa.

He admitted that there are many good things and bad things emanating from China-Africa Relations, but is up to Africa to evaluate their policy priorities.

Judd Devermont was speaking in a public lecture organized by the US embassy in Kenya and department of Political science at the University of Nairobi. He is currently a Professor at George Washington University.

END_OF_DOCUMENT_TOKEN_TO_BE_REPLACED